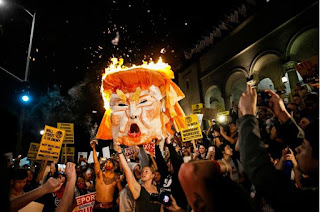 I grew up with right wingers in a mid-American state of right wingers. They were not intellectual or metropolitan racists. They were rural, isolated had recently lost their farm and their way of life and were trying to learn how to run a bleak rooming house in a mid-American town. They had a meager, very fragile income and no safety net below and they did not trust new Social Security benefits and were much too proud to see government or any other hand outs as any solution for them. Very few events in their lives brought up cognitive dissonance.

No self-questioning of their late 1930's fear of FDR's still not proven New Deal and no questioning the way the Republicans, the America Firster's and the rich media owners of that time invited them through print, pulpit and radio to rely on their profound rural isolation as sufficient frame of reference for their sense of the future in a world heading for a very real and very metropolitan modern nightmare.

They, now, still stiffly refuse to give credit to FDR and later LBJ for the WWII victory and the supportive post war economic boom and benefits they now rage at loosing. They now continue to blame minorities and foreigners for taking from them what Republicans, the America Firster's and the rich media owners HAVE BEEN FOR 30 YEARS AND ARE NOW CLOSING THE DEAL to take completely from them. They were then, and are now still, being taught by their trusted sources of information, to blame foreigners and minorities and progressives for the problems and discomforts (physical and mental) in their lives. Very little cognitive dissonance yet in this, my home group.

It is not yet a good time for us to start holding our collective breath counting on them to start the self-questioning process any time soon.

There is much effigy burning and much voting and winning a return to at least relatively progressive government ... and every day that passes with the Republicans in office... many more executive orders and much more regressive legislation to overturn.

Update:
To follow up the above: I am now remembering that my parents lost our small rural home in a forced sale to a rich city guy in the early 60's. We ended up staying in that house PAYING RENT! The 'rich city guy' was dad's boss. Two generations of major loss did not change the my parents politics. (But it did change the politics of each of their four children and apparently their grand children as well.)
Posted by Poet's Mouth at 2:48 PM

POET'S MOUTH is the public mouth for poet and multimedia artist, Chuck Britt and TRANSVALUE.